“Snares are incredibly cruel tools; they are usually made of wire or cable, tied to a tree or a rock, something stronger than the animal its intended for, so as to hold it until the poacher returns.”

Stress, fear and pain generally results in the snared animal pulling and fighting the noose until it is either constricted and dies or manages to break loose, most often with severe injury. On the morning of the 2nd of March 2020 at about 10 am, two cheetah-brothers suddenly took down an Impala, a mere 5m away from the new Flamingo vegetable garden at the Fort. The two males who were seen bringing down the animal, sat quietly under an acacia tree for the following half an hour, catching their breath. Cheetah, although the fastest animal on our planet, can only maintain their incredible speed for approximately 30 seconds, in which they can cover a distance of 1km. As we observed the boys trying to catch their breath, we realized they were constantly looking behind them, into a thicket just too far for the naked eye to identify any form.

The siblings eventually started to eat at about 11am and had just tucked into their kill when we heard a high-pitched ‘chirp’. Both of them immediately looked back and whilst the one brother continued to eat, the second brother walked off into the distance in the direction the call was coming from. Then suddenly from within the thicket, the third brother appeared, seemingly in a very frightful state, clearly uncomfortable with its surroundings and agitated at something. Due to the high predator density on Onguma, the cheetah usually keep to the open plains, since the dense bush not only makes it difficult to spot their enemies, but also to successfully take down prey without the chance of injury. So naturally, the thought was that the third cat was simply anxious due to his surroundings or possibly being exposed to humans, since the kill-site was close to a relatively busy area.

En route to the Impala-kill, the third brother turned off to hide behind a Termite hill; as he turned, it was clear that there was something amiss. It took us a few minutes to figure out what was wrong – when we saw the big gash on his belly we realized that this was the reason for his anxious behaviour! According to reports, this male had been caught in a snare a few weeks prior; Onguma Wildlife Manager, Jonathan Strijbis, together with the AfriCat Foundation’s veterinarian, Dr Diethard Rodenwoldt, had attempted to immobilize him to remove the snare. Unfortunately, the thick bush on Onguma makes it challenging to get a clear shot using a dart-projector and after repeated attempts at finding the injured cheetah, the immobilization was called off.

A few hours later, everyone jumped into action: Dr Rodenwoldt’s assistance was called upon, arriving on-site Onguma at about 15:30. In the meantime, two spotter vehicles were posted in close proximity to the three feeding males. Upon the veterinarian’s arrival, our team set out to the location, where by now the three males were apparently resting. Unsure as to the exact position of the injured male and aware of his skittish nature, we proceeded with care…the two healthy brothers, probably done with their meal, stood up and made their way towards our vehicles, parked about 30 metres from the coalitions’ initial resting place. The injured male that was lying hidden in the bushes in front of us, suddenly jumped up and all three boys were on the move once more. 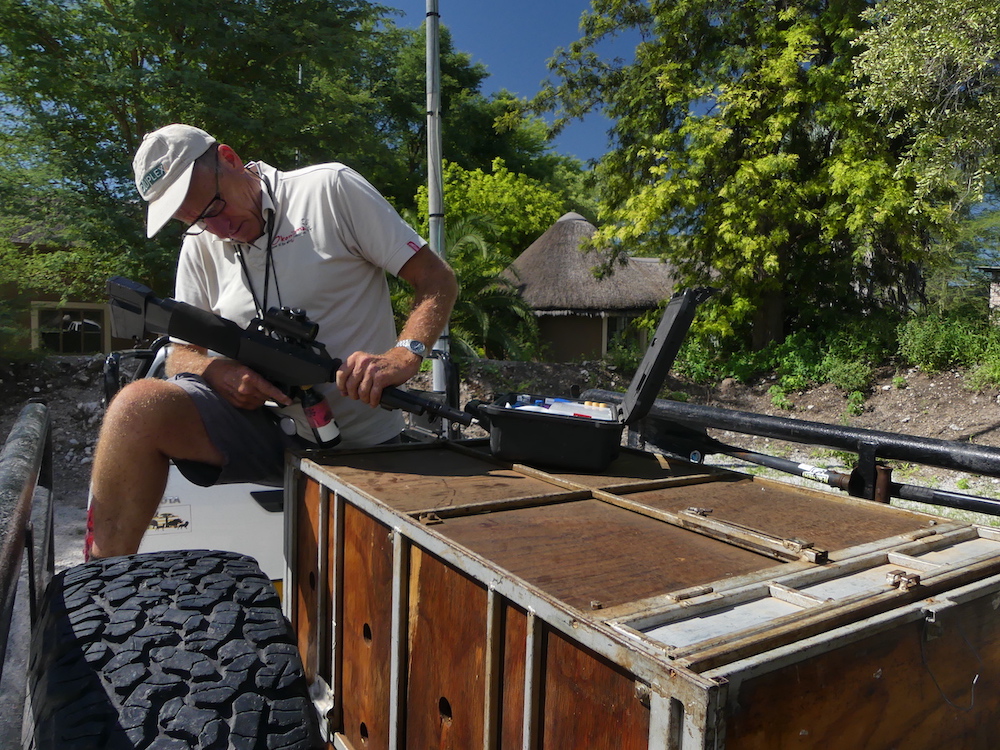 The injured male, that was walking ahead, darted off into the thickets, crossing the road soon after, posing a good opportunity for immobilization; we set off after them but unfortunately, Dr Rodenwoldt never managed to get his shot in. Darting wildlife is a complex process as the distance to the target animal needs to be estimated as accurately as possible. For ideal dart placement in muscular tissue for best effect, and to avoid accidently hitting a bone and bouncing, without penetrating properly.

A brief strategy meeting to establish a tracking plan was called between Jonathan, Dr Rodenwoldt and Anti-Poaching Unit leader, Glen; we soon set off in 2 groups, Glen on foot and Dr Rodenwoldt together with Jonathan, set off in their vehicle to wait at the next road crossing, in the hope that the cheetah head off to water and then rest up after having just had such a big meal. Thirty minutes passed with no sighting so we circled back to where we had first seen them; Glen had since deployed into the thicket to try to establish their location, as we suspected that they had stopped to rest.

To set the scene for those who have not yet visited the Onguma Reserve during the ‘green season’, the vegetation surrounding The Fort comprises dense shrubbery and trees, thorny Acacia species, the Purple-pod Terminalia (Terminalia prunoides) and the Trumpet-thorn (Cataphractes alexandrii), to name but a few, complicating the search for the suffering cheetah.

Needless to say, we feared that the injured sibling was in a state of stress.
Time is of the essence when tracking an animal in this state; we hoped to find the trio before they disappeared into the next thicket, but the dense bush hampered all attempts. Despite the lack of visibility, the Francolin and Guinea Fowl calls marked their continued movement…

After some time, something made us suspect that they had changed direction. After backing up some 40 metres, we spotted them right next to us about to move into the next thicket, but the injured male had gone ahead and was out of sight. We only saw the two healthy siblings, calmly disappear into the bush once more.

At this point, we were about 100 meters from the Onguma Bush Camp waterhole; knowing that they had recently eaten, were in dire need of a rest & a drink, we decided to wait for them at the waterhole. We parked the car inconspicuously behind a large fallen tree right in front of the waterhole and waited….by this time the afternoon light was disappearing fast with only about 45 minutes left before dusk. Unfortunately, immobilizing and treating the cheetah after dark was not an option, since Onguma does not have a soft-release camp to hold the cat and his siblings, until he has fully recovered, safe from lurking Spotted Hyaena, Lion and Leopard.

Sadly, the brothers never showed up. The APU team set off into the thickets where we had seen them last, but they could not find them. Dr Rodenwoldt kindly offered to stay the night, which gave us the chance to try again in the morning.

Snares are incredibly cruel tools; they are usually made of wire or cable, tied to a tree or a rock, something stronger than the animal its intended for, so as to hold it until the poacher returns. Stress, fear and pain generally results in the snared animal pulling and fighting the noose until it is either constricted and dies or manages to break loose, most often with severe injury. In this case, the Cheetah had the snare around its belly, just in front of its hips. The wire had pulled tight but not tight enough to stop blood-flow. However, pieces of wire were hanging loose causing the wound to open up each time the cheetah moved preventing any chance of healing. Animals heal incredibly well and often survive if the constriction doesn’t cost them a limb, or as in this case, if the animal belongs to a coalition where siblings can ensure sufficient food is provided, in order for it to survive.

We set out at first light in two vehicles and a team of 5, including Dr Rodenwoldt, starting at the kill site, but Hyaena had passed in the early hours of the morning, dragging off what was left of the carcass. With changed plans, one vehicle went north whilst the other continued searching the area where we were the day before, driving slowly passing each intersection hoping to catch a glimpse of the cheetah. Two hours later, we decided to deploy three men on foot, our Head of the APU, Head Farm Manager as well as an APU rookie. They split up to cover the western side of the property, towards the Etosha National Park fence-line. About an hour in, we were informed via radio call that the siblings had been spotted in a bush thicket, north-west of The Fort. It was about 9 am, the time of day when cheetah tend to lie in the open to warm up. However, on a nature reserve such as Onguma, Cheetah are constantly aware of other predators, such as Hyaena or Lion, so they often choose more bushy areas close to the plains.

We immediately set off in their direction; but were faced with a tricky situation: The Etosha National Park boundary fence was about 300 metres to the west, with open plains to the north (including the risk of a looming lion pride), and our two teams located to the east and to the south of the thicket.

The wind was also not in our favour, so we decided to split up; Onguma had received over 200 mm of rain during February, so those of us on foot, had to tread carefully or we would have ended up ankle-deep in sludge and mud. Approaching the point where we had last seen them, there was still no sign. We changed course, heading towards the boundary of the Etosha National Park, where we found fresh tracks along the fence-line. They must have heard us coming and veered west to avoid us, where we then lost them. There was no evidence that they had entered the Park, so thankfully the three were still on the Onguma property at this point, but we were no closer to relieving the cheetah of its pain.

At this point, we sadly had to abort the attempt at removing the snare. Dr Rodenwoldt had to leave for Windhoek by 11:00 am, a 6 hour drive, the Etosha State Veterinarian was unfortunately busy with another project, which had taken him out of the Park during this time.

This was the second attempt at darting this injured cheetah; unfortunately, both attempts were marred by time constraints and the dense, summer vegetation preventing good darting opportunity. Another consideration is the negative effect of vehicles and people continuously trailing these cats making them more nervous and shy than when the regular game-viewers slowly track them. In addition, we need to remember that the dynamics have shifted, the third brother is impaired and knows it; he is more skittish and nervous which transpires to the rest of the coalition.

Our dedicated teams continued to search for the coalition however the brother with the snare was never seen again. The two remaining brothers are a strong duo and we will continue to follow their success in the Onguma Nature Reserve.

It is very disheartening to have lost this animal especially after so many attempted rescue missions. Our dedicated APU unit who are deployed weekly, continue to eradicate ALL snares they come across whilst on patrol within the nature reserve, in the hope of preventing this from happening to any other animal in the future.