One of the most graceful of all the African cats, the Cheetah is the fastest mammal and one of the few cat species which relies on speed instead of stealth when hunting.

The Success and Failures of the Onguma Nature Reserve Cheetah Coalitions.

The Onguma Nature Reserve is home to two permanent cheetah coalitions that have been seen regularly with cubs each year since 2017. Cheetah have a difficult time surviving in the wild for a plethora of reasons. They are diurnal predators, which means they only hunt during the day, to avoid the risk of being spotted by another predator. Cheetah hunt in open areas where they will try and get within 150 meters of their target before starting the final chase and more often than not they choose prey that is isolated from the rest of the herd to increase their chances of a successful hunt.

The preferred prey for a Cheetah is medium sized antelope such as Springbok and Impala with a body mass of no more than 60kg’s. The cheetah is very finely built and by targeting bigger animals, they risk injury which due to their solitary lifestyle, often leads to death. It has been documented that a coalition of male cheetah may take down larger prey such as Zebra or Kudu, however only ever smaller or weaker animals. Cheetah are very picky eaters, which means they are rarely seen scavenging. They lack a proper defence mechanism which ultimately makes them victims of kleptoparasitism, whereby larger predators such as Lion, Hyaena or even vultures often steal their kill. 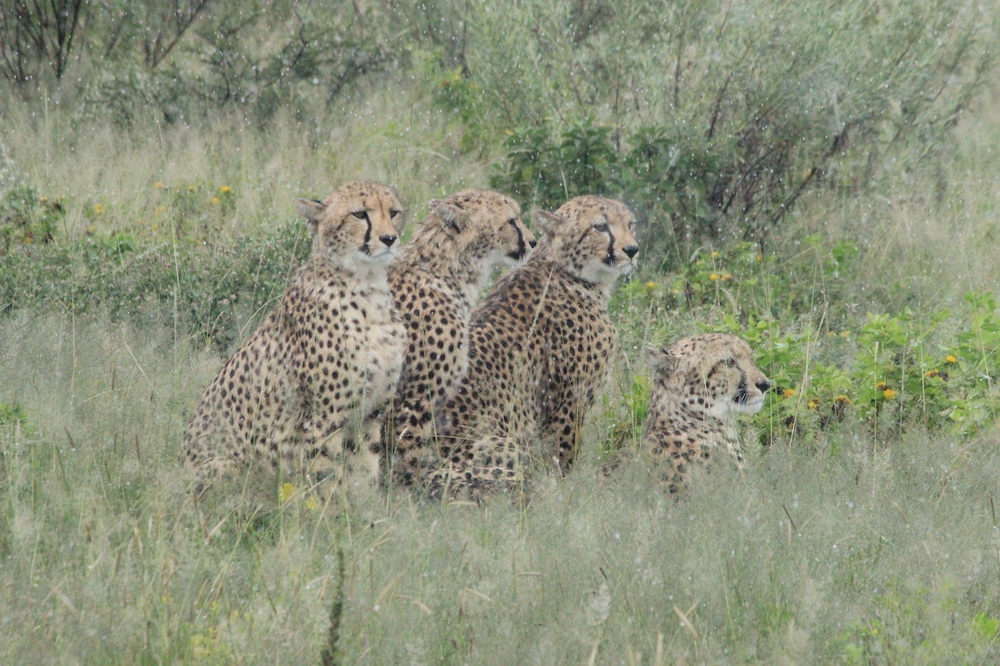 “Historically cheetahs were distributed widely throughout Africa and occupied a range of about 25 344 648 km2; however the known range has more recently been drastically reduced to a mere 2 709 054 km2 – a shocking decline of 89%. Due to human pressures the distribution of cheetahs have been modified greatly. There is a known population of approximately 6 700 adults across 29 subpopulations left in the wild. The two largest meta-populations occur in East Africa and southern Africa. Its presence across the continent has declined to a mere 10% of the historical range. The range in eastern Africa has reduced to 6% of its original extent, so that presently it is distributed in an area of 310 586 km” – Sanbi.org

Notes from Onguma’s Game Ranger – Jonathan Strijbis on our coalitions on the Onguma Nature Reserve. Jonathan spends his days in the bush, collecting camera trap footage, observing wildlife and ensuring the safety of our reserve and our wildlife.

“The first time I encountered one of our most successful cheetah mothers that I have ever seen was in April 2017 with 6 new born cubs. The images below were taken by which time she only had 5 remaining. With our high density of Spotted Hyaena and Lion as well as multiple other threats, any one of the before mentioned could have been the reason for the death of the 6th cub.

By August that year there were only 4 left. These 4 made it to subadult age and we eventually lost track of them as they went their separate ways.”

Cheetah have a unique social organisation whereby females live alone or accompanied by dependant cubs of up to 18 months of age. Males live in stable coalitions of up to 3 males, usually brothers but unrelated males have also been seen grouped together.
“ Cheetahs in the wild are considered seasonally polyoestrous (have more than one period of oestrus in a year) and do not have a specific breeding season, meaning their young are born at any time of the year. Females become sexually mature at 21–22 months of age and have a three-month gestation period. A female can give birth again after 17 to 20 months; however, on the loss of a litter, mothers can mate again” – Sanbi.org

“Since the sightings in 2017 we have had another 5 cubs born the following year (2018), where only 3 survived until adulthood, which are amazing statistics given the daily threats. In 2019 we had another set of 5 cubs born, it is hard to say whether this is the same mother, however we do believe there is some connection, be it her or a daughter of hers from her previous litters. Early 2020 4 cubs were spotted with their mother on a kill close to the Onguma Fort. We also have seen a trio of younger males in close proximity to the female with her cubs, these could be young adult males from the previous litter who have also made Onguma Nature Reserve their home.”

The life of a cheetah on Onguma is far from easy. Mother Cheetah are very attentive to their new-born cubs, hiding them and moving them constantly to avoid being spotted by predators. The cubs are moved from den to den regularly by being carried,one by one, by the scruff of their neck, this action relaxes the nerves and actually calms them during the move. It takes three months until the cubs are weaned and by eight months they begin to practice their hunting skills. The cubs are only completely independent after 18 months of age. After which they move off, securing their own territories, during this time they travel great distances to find the right areas to settle into, often being exposed to larger predators.

The cheetah is listed Vulnerable on the IUCN Red List with a known population of approximately 6 700 adults across 29 subpopulations. Due to the exotic pet trade, human-wildlife conflict and habitat loss, the cheetah is facing rapid declines.

Namibia to this day remains the home to the largest population of wild cheetah in the world with over 3500 individuals. We are very lucky to have cheetah on Onguma that, against all odds, thrive and have managed to do so well.